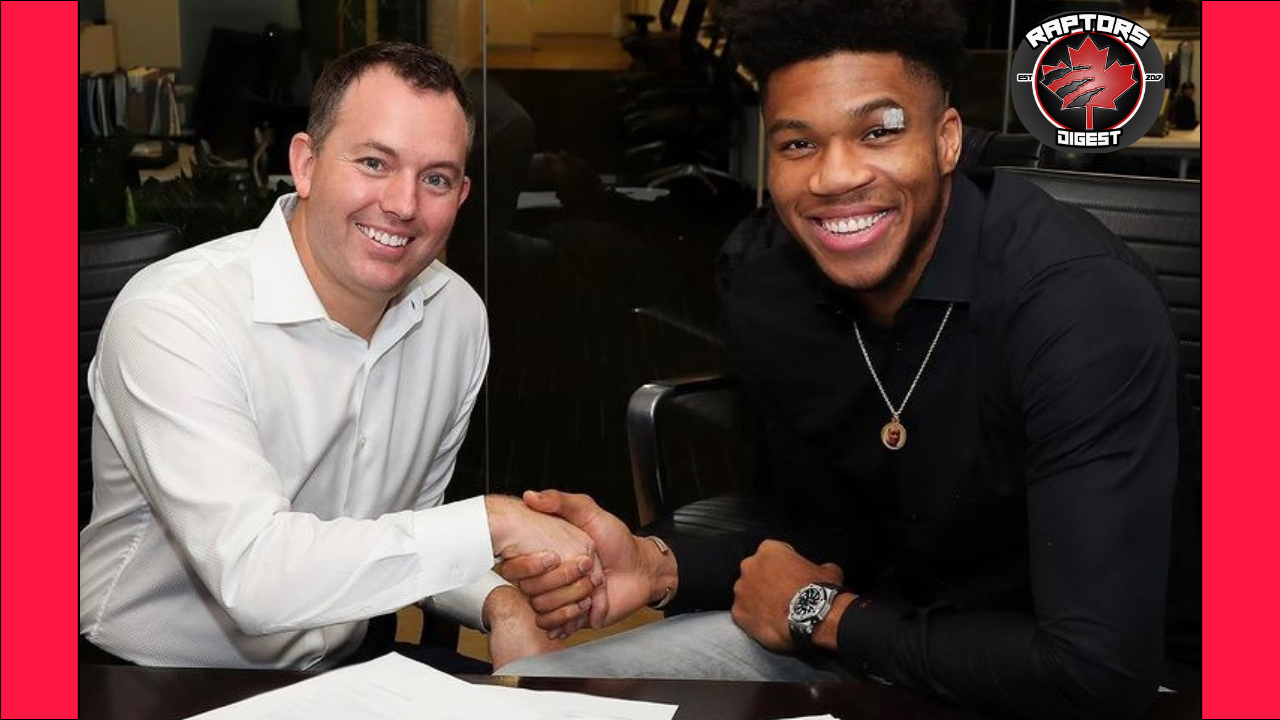 Moving on from Giannis

Welp… that didn’t go according to plan.

Last week, Giannis announced via Instagram that he’s re-signing in Milwaukee, as the Bucks locked-up him up for another five seasons at $228M. I am happy to see a player of such humble beginnings cash-out, but I am additionally heartbroken to see Toronto miss their opportunity to pay him that record-setting bag.

There’s been a well-documented rapport between the Raptors and Giannis, dating back to Masai’s assistance of the Antetokounmpo family’s migration from Nigeria to Greece. This month, Toronto conveniently released videos of their draft-room in 2015, capturing Masai as he awaits the status of his trade proposal for the 14th overall pick. Ultimately it was rejected by the Bucks who drafted Giannis that night, but Masai still added that “We don’t think many kids in 2015 will be on his level in two years”.

He’s been an outspoken believer of Giannis since the beginning, and the free agency buzz in Toronto hasn’t been completely one-sided. At the 2020 All-Star Game, Giannis selected both Lowry and Siakam as his draft picks while captaining a Nick Nurse led Eastern Conference All-Star team. The Raptors really formalized their pursuit of Giannis by letting Serge Ibaka walk this off-season, as reserving maximum cap-space took clear priority. Rather than continuing to break-down the heart-wrenching reasons behind why it all seemed possible, I will outline the few saving graces of this situation…

With Giannis scratched off the 2021 free-agency market, it becomes more likely the Raptors do not absorb a max-contract that off-season. Albeit unfortunate, it has allowed the Raptors to ink small-forward OG Anunoby to a 4-year $72M contract, breaking down to $18M of annual pay. Since drafting the Indian Hoosiers product 23rd overall in 2017, he’s ascended to a special role within the Raptors schemes on both ends of the floor. OG has become a reliable floor-stretcher when given a little space, and he increasingly looks to create offense off the dribble; a previous weak-point in his game. Additionally, as such a versatile defender, Nick Nurse can implement OG into a variety of spots; including potential small-ball lineups at centre.

His new contract is a massive win for the Raptors, as the 23-year-old is coming off a season where he averaged 13.0 PPG, 6.1 RPB, 1.5 SPG, while shooting a career-best 39% from three-point range. These are similar numbers to that of Jerami Grant, an impressive small-forward who signed with the Detroit Pistons this off-season for a 3-year $60M deal. Not only is OG slightly more affordable than Grant, he’s also a few years younger and shows more defensive upside.

I always felt like Anunoby would be an attractive piece to help lure Giannis, as they are both physical, hard-working defensive players. Although that dream has crashed; it’s opened up the door for Toronto to lock-up OG right now as a young piece to build around. The Raptors should feel great about this, and I know the fan base is thrilled to see a humble guy like OG receive a well-deserved payday.

Norm will be an interesting situation come trade deadline this year.

The 27-year-old shooting guard is entering the final year of his contract, and will certainly be looking for a pay upgrade from $9M yearly. Last season, he averaged 16.0 PPG, 3.7 RPG, 1.2 SPG, and shot a scorching 40% on 5.3 three-pointer attempts per game. When given some leash and a green-light, Norman Powell can score at an all-star level. Yet I do have some concerns... As inconsistency and injuries have remained an issue for Norm, and there is a growing core of talented guards chomping at the bit behind him.

As much as I love Powell, I believe the best direction for Toronto would be moving him for assets at the trade deadline this year. However, if he continues to shine and neither Matt Thomas or Terence Davis can solidify themselves, I would happily explore re-signing him. Without Giannis in the picture, retaining Norm has gone from near-impossible to an actual prospect depending on his upcoming play. This isn’t a massive saving grace, but added cap flexibility will be appreciated by some fans who have become sentimentally attached to Norm.

Norm shows glimpses of being an elite NBA player, and he is currently the second longest tenured Raptor on the roster… To many of us, Norm is still thought of as our bouncy rookie who became an unlikely hero during the 2016 payoffs versus the Pacers. The Raptors have paid-out Norm once in his career, and the loss of Giannis as a free agent target lessens restrictions in attempting to retain him. With that said, I expect Toronto to be shopping him for most of the season, but this at least keeps more doors open from a managerial perspective.

Return of the Klaw?

Just yesterday, Kawhi spoke to media explaining his decision to not re-sign with the Clippers prior to the deadline; “Obviously, if I’m healthy, the best decision is to decline the (2021/22) player option,” Leonard said, “but that doesn’t mean I’m leaving or staying. I’m focused on the season, like I said. We’ll talk about that when the time is right.”

I don’t want to blow this out of proportion, as these monotone, grey-area comments from Kawhi have become quite customary. Yet he evidently has elected to not guarantee any long-term future in LA, meaning the circus which is the Clippers has one last chance to conveniently combust. There is no denying the Clippers have justified contention aspirations, but team chemistry is something which has repeatedly frustrated them. Say what you’d like about Montrezl Harrell; I don’t think he was the problem.

Everyone was very quick to praise Doc Rivers for Kawhi’s increase in assists, but this is more a reflection of lacking a true point guard on their roster. In an ideal situation, Kawhi doesn’t record those assists; instead he’s deferring to a floor general who can facilitate him and others.

Toronto was a seamless fit for Kawhi, as his teammates there posed no toxic egos or demand for offensive ball dominance. Since his disappointing departure, Masai ironically claims to have only strengthened his personal relationship with Kawhi. With his championship roster still largely intact and improving, a return to Toronto could make logical sense for him assuming the Clippers continue to struggle.

A lot would need to go right for this to happen, but the loss of Giannis as an option in 2021 should definitely open-up serious interest from the Raptors. Maybe I’m kidding myself, but I like to think Kawhi regrets leaving such a trusted winning situation for what Los Angelos has turned out to be.

Raptor fans may not appreciate Giannis re-singing with the Bucks now, but this precedent could eventually benefit an organization like Toronto.

Since Masai was unable to lure him, I am relieved that he’s chosen to stay in Milwaukee opposed to signing in Dallas, Miami, or Golden State… This should be viewed as a league-wide victory for small market teams, and although Toronto is a massive basketball city, Canada is often stigmatized into this category. The Raptors are top-10 in monetary worth among NBA teams, yet the majority of American players still view Toronto as a second-tier destination.

We have a painful history of free agency breakups, including decorated names such as Vince Carter, Chris Bosh, Tracey McGrady, Kawhi Leonard, and most recently Serge Ibaka. Clearly there is a multitude of factors at work (namely weather), but many of these stars departed because they too struggled to attract fellow talent into Toronto to play alongside. When Giannis decided to return to Milwaukee, I am sure he was thinking of Kobe Bryant and leading a legacy which reflects loyalty to one organization.

This type of sentiment has evidently faded in the modern NBA, and I truly respect Giannis for hunkering-down and going against the grain. Essentially all of Toronto’s success has come through draft development, and if more players can revitalize a trend of competitive loyalty, it would certainly play into the favour of the Raptors.