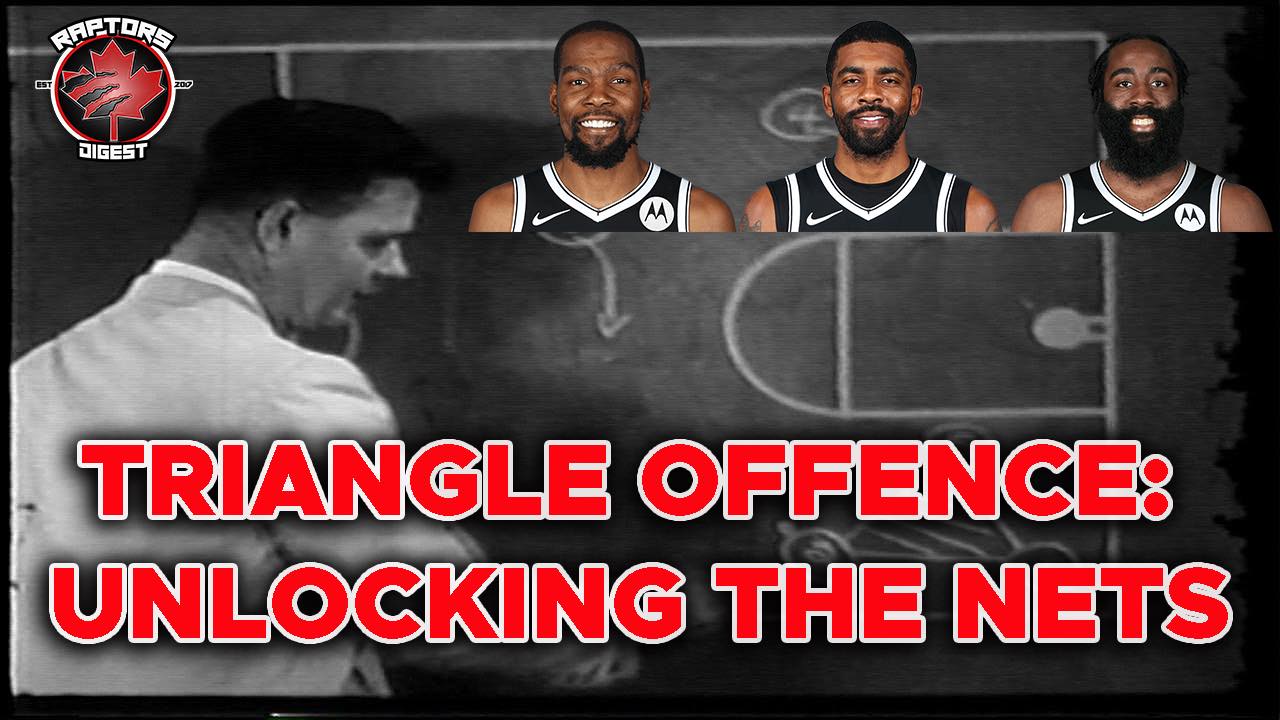 The Beard, The Nets and The Triangle - Full Breakdown of the Nets Offence

We all want the Raptors to do well in the post-season. To reach this aim, it would require overcoming the Eastern Conf. powerhouse which is the Brooklyn Nets. This is an offensive heavy line-up, including two former MVPs, who can significantly heighten this challenge for Toronto. The way they are playing right now is very isolation-heavy, but that will most likely change in the playoffs. If they implement a more team-oriented approach, it could definitely generate a huge challenge for our Raptors.

With the recent James Harden trade, Brooklyn quickly climbed the league power-rankings. They are 7-4 since the trade.  This is a crazy team with the trio of Harden, Durant, and Kyrie. They can easily elevate the Nets to a top offencive output in the league. Currently, they are second in the NBA for offensive efficiency at 116.1 (only 0.2 way from the first). With this record and ability to produce, you might be wondering why they need to change anything. Well, the answer to that question is simple.

It is the regular season, not the playoffs. Brooklyn plays mainly an isolation game through three options. In the regular season, they can collect wins by playing this style since the majority of teams in the league (especially in the eastern conference) match-up extremely poorly. The playoffs are a different story however. Teams with a combination of talent and strategy always find success, as demonstrated by Toronto during their 2018-19 title run. I believe for the Nets to succeed in the post-season, they will need to refrain from this isolation-orientation style and move towards a strategic set-offence. What I would like to see, specifically, is the implementation of the triangle offence.

Let me provide a brief history lesson. The triangle offence is a scheme created by Tex Winter, primarily popularized by him and head coach Phil Jackson of the Chicago Bulls (and the L.A. Lakers).  Collectively, these two created a path for 9 different championships squads using the triangle offence. Take a look at the images below which detail the triangle set-up.

The triangle always begins with a key pass, then re-locating by cutting to the baseline/corners. Here we see a pass made from the 1 to the 2, and it remains crucial for the 1 to cut around to create this triangle formation; leaving the 5 as the apex of the triangle.

Now is where it gets tricky… The ball then can swing anywhere (base, corner, or anywhere around the arc), thus creating a new triangle.  The purpose of this scheme is for the utilization of “equal opportunity offence”.  This allows efficient off-ball movement, simultaneously ensuring all players to operate within their strengths. There are 33 different options that come from a key pass leading into a triangle, as stated by Phil Jackson. Some say its not this offence alone that will lead to championships, but the talent involved Is always most important. Luckily for the talent-rich Nets, they meet this pre-requisite.(Click here if you want to learn more about the triangle)

Putting aside alleged locker room issues, Kyrie is a top-3 point guard in the league. Harden has become more of a team player since the trade. He currently leads the league in APG (12.0). This will be key in the triangle as it needs a great facilitator for this to work. Irving is a good a facilitator (5.7 APG), but his scoring ability is far too great to be ignored. Harden is a historic scorer as well, yet he is recently proven his best fit with the Nets lies as a facilitator. Having KD, Kyrie, Harden, Harris, Jeff green (whose playing like his old-self), Shamet, and possibly DeAndre Jordan, forms an excellent roster to initiate the triangle. It will be more effective than their isolation plays, which have only utilized 2-3 players on the team.

What would happen if the Nets triangle met the Raptors defense with our current team? Before anyone says anything, my heart always believes they will win every series. However, in my head and reality, I know it would most likely not happen. That being said, do I believe the Raptors can beat the Nets especially if we get another big? Absolutely I would say there is a chance. Is it realistic? Absolutely not. The Nets are an offencive team with an offencive rating of 116.1. There is only two ways to beat a team (especially one with massive offencive power). One is to play an extremely well strategized defense, or one just to simply out-score the opposing team. During last night’s W against the nets (click here for a r ecap), our defense showed significant growth and matched up well. In a triangle, our defense needs to be tougher. As much as I love Yuta, Boucher and Baynes; their defensive ability would not be enough. We would need another.

We do have the ability to outscore especially having FVV and Pascal, but it would be very difficult if the Nets run the triangle offence. It would then become even more daunting to out-score them. This could be one of many post-season challenges for Toronto, but knowing our team, they will not back-down. In other words, (specifically from one of my favorite bigs) “ANYTHING is POSSIBLE”!