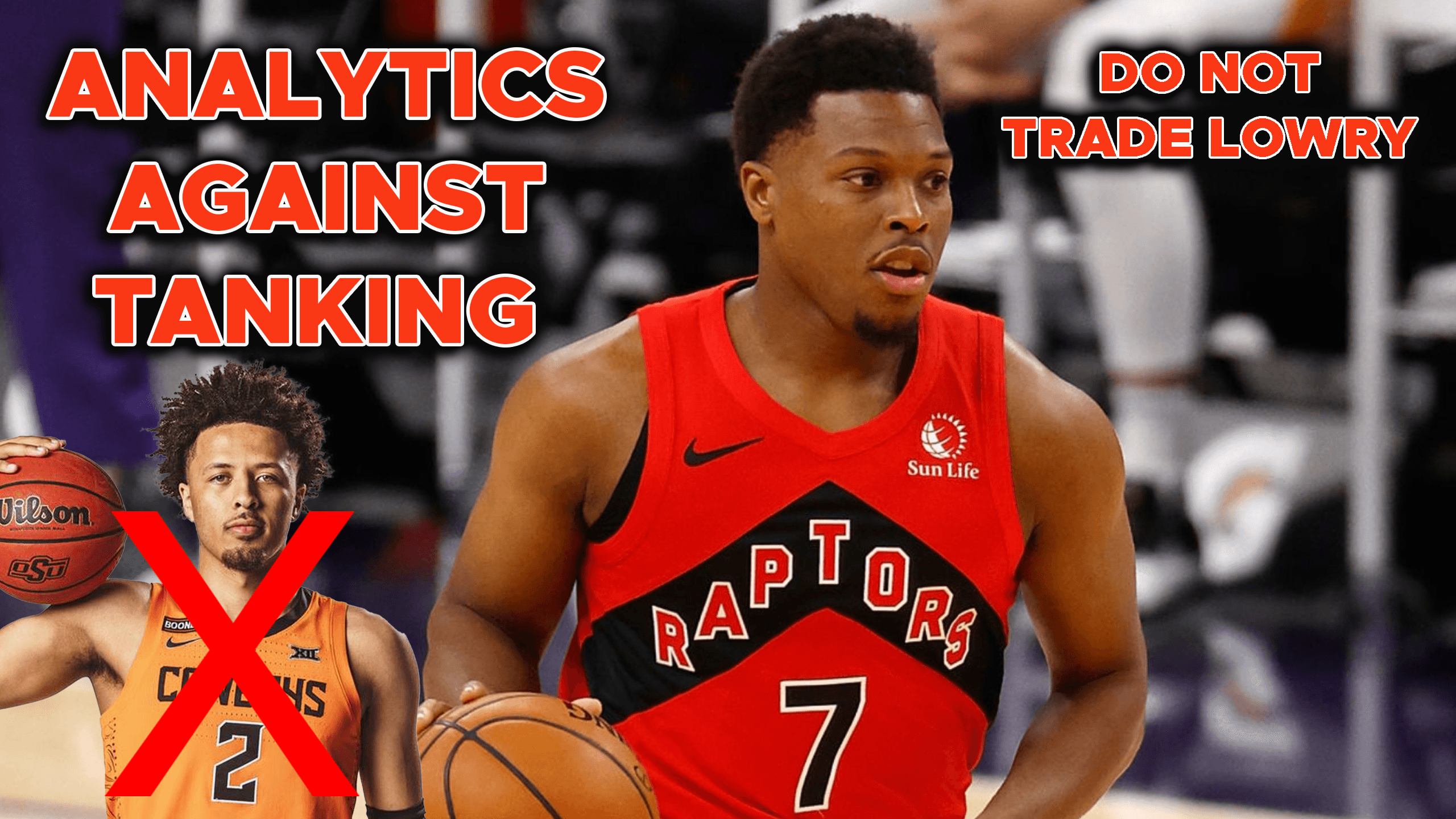 Tanking: The WORST Possible Path for the Toronto Raptors

“Fade 4 Cade”, “Trade Our Core”, “Start the Tank''.  These were the demands of a frustrated Raptors fan base following a horrid 2-8 start to the season. Tempers soothed as the team bounced back with a three-game win streak, only to flare up again after a tight loss to the Sacramento Kings. At this point in late January, the team was a bottom seed in the NBA with Kyle Lowry as an aging star, and two players with lucrative contracts showing little consistency. Many fans viewed tanking (purposely being bad for the sake of a better draft pick in the future) as the only reasonable path forward.

Since the early doubts and premature grumblings, the Raptors have improved their play and have climbed their way into the middle of the Eastern Conference. But, there is still a significant dichotomy in the fan-base; there are those who want the team to win games this season, and others who want to win the first overall draft pick. I am here to argue why the latter option would be the worst possible direction for this Toronto Raptors team in their present situation.

The Origins of Tanking

Tanking was brought into the mainstream early last decade by the Philadelphia 76ers, embarking on what became known as “The Process”. After narrowly missing the playoffs due to a failed experiment with Andrew Bynum (yikes) in the summer of 2013 general manager, Sam Hinkie decided to start the tank. He moved on from young all-star Jrue Holiday and established veterans, such as Thaddeus Young and Evan Turner,  for extremely raw players and draft compensation. The idea was for the team to be as bad as possible for many years in hopes of securing true star players in upcoming drafts. From 2013 to 2017 the Sixers forged their way less like an NBA team and more as a G-League team. Yet slowly they were accumulating valuable assets as the years wore on.

After a half-decade of unwatchable basketball, the team finally acquired a couple of the big-name players it was searching for: Joel Embiid and Ben Simmons. Even though the team is yet to make a conference final, tanking has been labeled the “Gold Standard” for teams who have been struggling to break from mediocrity.

Tanking supporters often argue that analytically it makes sense. The logic follows that the worse a team is, the more likely they are to secure a higher draft pick. Statistically speaking a team is more likely to draft a superstar player with a higher pick, and in turn, that superstar is more likely to win a championship (just look at Kawhi Leonard). This thought process is validated in the fact that the god-father in tanking, Sam Hinkie, is labeled as an “analytics guy” himself. This seems to set up a pretty sound argument, complete with evidence and logic. However, I am going to show that the math does not support “the process” and even though a team like the Sixers have achieved moderate success, tanking is actually an awful strategy for an NBA franchise.

I conducted an experiment analyzing every NBA team’s record since the introduction of the draft lottery in 1990. Each team was classified with a number based on their performance that season. A team was given a label of zero if it was a bottom five seed in the league, the next five worst seeds were given a label of one, and so on providing labels zero…five. If a team made the finals that season, however, they were given a classification of six. A more intuitive visualization of this scoring system can be shown below. 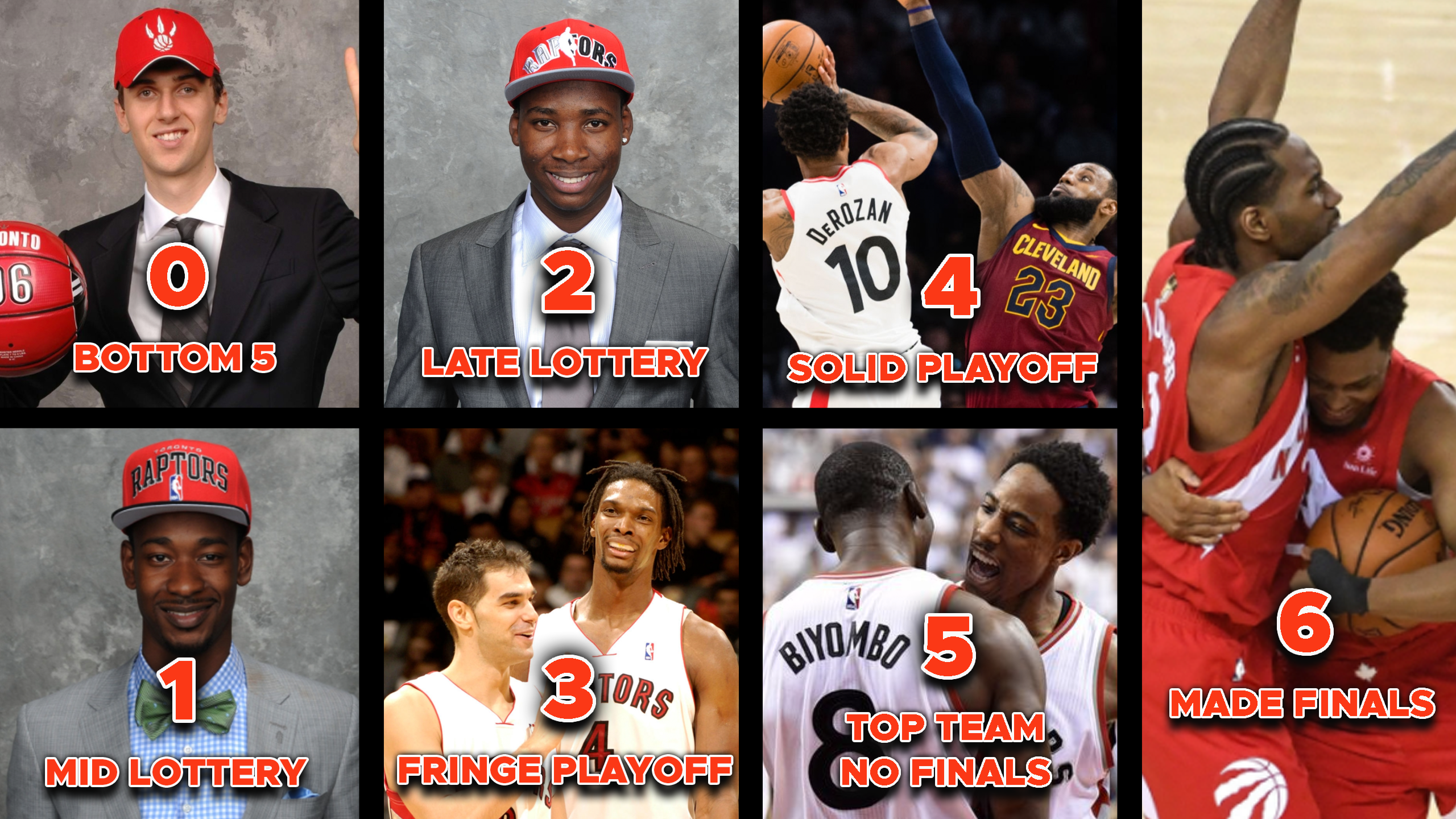 Once each team was classified with a number for each of their seasons, it becomes possible to measure the probability for a team to move from one number identity to another. For example, one can see how likely it is for a team to transition from a fringe playoff team (state 3) into a team making the finals (state 6) after one season, or even from a solid playoff team (state 4) to a basement dweller (state 0). With these probabilities stored, we can construct Markov Models that are capable of simulating years of performance based on where they placed the previous year. Hence if a team was previously a bottom feeder, we can simulate that team’s performance in the following seasons in accordance with real-life probabilities. If you want a deeper look into the code, it can be found here.

The Results and Takeaways-- Dependent on Your Idea of Success

NBA fans have different definitions of success. Some see making the finals as the only true judge of success, while others see being a top seed in the league as a strong end goal. And certain fans of struggling teams would even be happy being a perennial playoff contender. Hence, I conducted three experiments each with different goals in mind. Given a certain starting point, I measured the probability of reaching a certain level of success in the following ten seasons. To ensure accurate likelihoods, I ran 50,000 simulations for each experiment. The results are shown below. 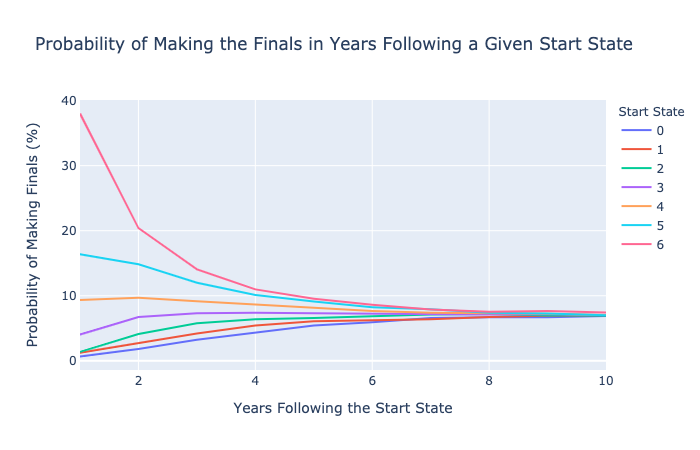 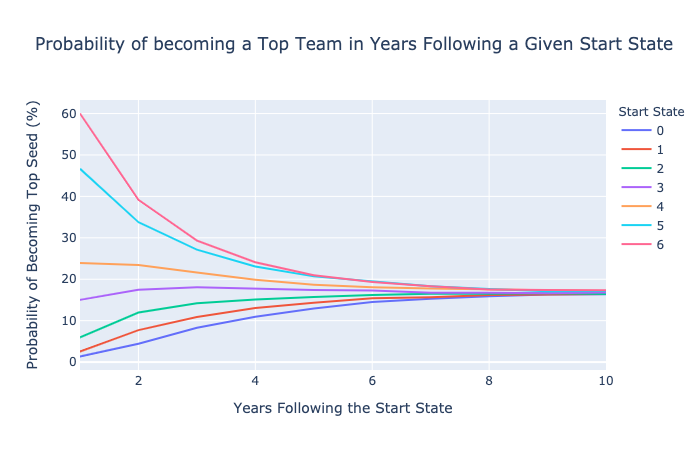 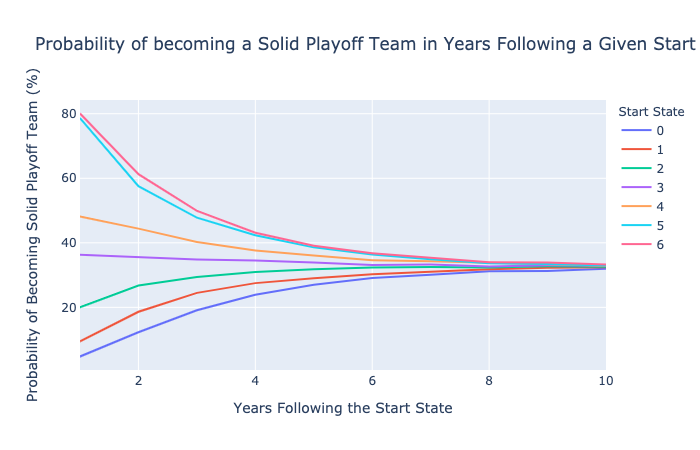 One clear takeaway from this analysis is that good teams tend to stay good in the immediate years after their success. A team that has made the finals in the previous season has over a 37% chance of making the finals the following year and a 60% chance of being a top overall seed. These statistics are also reflected in inter-year standing trends as it seems the same teams dominate the top of the league year after year. However, most teams considering tanking do not start in the desired position that dominant teams find themselves in. And unfortunately for these teams, we do see a similar trend at the bottom of these graphs, bad teams tend to stay bad.

Regardless of how we define success, a team that started off in a worse position was less likely to reach their end goals within seven years of that initial season than the top or mediocre teams. Even though the teams in the bottom five were more likely to acquire a better player in the draft, they still performed worse than their better-seeded competition. When the gauge is winning rather than the number of star players you’ve drafted, tanking to become a bottom seed is clearly the worst strategy. And with the updated lottery odds that went into place in 2019 making it even less likely for bad teams to get the #1 pick, the value of tanking is exponentially diminished.

Why Tanking DOES NOT WORK

Tanking rarely leads to winning for a multitude of reasons, of which I will explain now. Firstly, nothing is guaranteed when tanking. There are no guarantees a bad team will secure a top pick and it’s not a sure thing there will even be a superstar level player in the draft. And even if everything does go right for a tanking team and they are perfectly positioned to select a star, rarely do teams make the right selection. After multiple horrific seasons, following the process of tanking, a team still has to be very lucky to draft a game-changing player.

But let’s say a team does strike gold with a player. There are still no guarantees for a complete turn around in that team’s win-loss ratio. Teams often would have had to gut their roster in order to draft this high, leaving little to no supporting cast or veteran leadership around the young star. At this point, the clock begins to tick until that player demands a trade to be rid of the environment which only harbours loss, anxiety, and frustration (especially in today’s NBA). For every Philadelphia 76ers team (who have only achieved success if we go by the solid playoff team standards) there are ten teams like Sacramento, Minnesota, or New York that live in the bottom of the standings year after year until they finally (if ever) change their strategy.

This does not mean there are not times when teams should get younger, acquire draft picks, and retool their rosters. But purposely thrashing talent in hopes of one day getting a star is a fool’s game; striking gold is a tired and non-rewarding pursuit after all. So no, the Raptors should not trade Siakam for pennies on the dollar, tear down the promising core we’ve built up all these years, or even think about Cade Cunningham. The Raptors are clearly not perfect as currently constructed. But to write off the team that is only 2.5 games back from being the third seed in the eastern conference, would be ridiculous. This team has surprised us before… who knows maybe they will surprise us again.

Finally someone has put Tanking in perspective. I never felt it was a good strategy. Successful franchises are able to stay in the top with sound trades and superior coaching.

How about retired players who could make a big difference like Lao Ming for a superstar big center?

How about retired players who could make a big difference like yao Ming for a superstar big center?